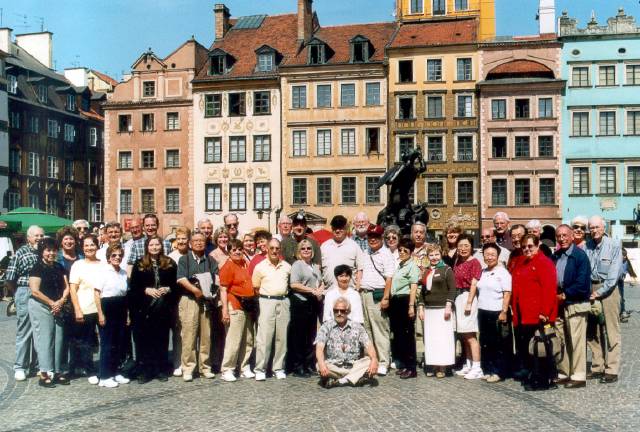 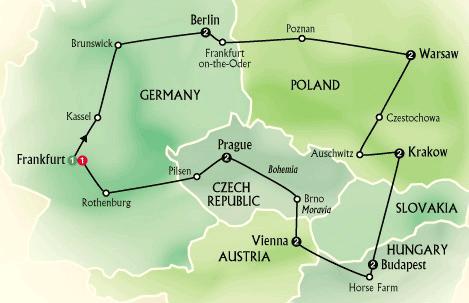 Eastern Europe trip, May - June 2002. For any of you who were on the tour, please email me if you would like to have higher definition, more detailed photos. Especially those of you who are in any of my pictures, let me know and I'll make better quality pictures available for you.

Sets 10 and 11 were made after the tour concluded. Michiko and Bob stayed an extra day in Germany and took the train to Rudesheim followed by a boat trip on the Rhine.

Photo captions will be added as I have time.

May 19, 2002: Morning sightseeing tour of Frankfurt, including its beautifully restored Römerberg Square. Afternoon visit to an outdoor carnival within walking distance of the hotel, with foodstands, beer gardens, carnival rides, and entertainment. Evening dinner meeting with tour director and other travelers of the group.

May 20, 2002: Frankfurt-Berlin. After a pleasant drive through the lush, green heart of Germany, take a break in the picturesque historic center of Kassel, where the Brothers Grimm wrote many of their fairy tales. Before leaving, enjoy vistas of the Wilhelmshöhe Park and the sweeping panorama from the foot of the towering Hercules Statue. Lunch break in Till Eulenspiegel's Brunswick (or Braunschweig), where a medieval fair was taking place. Lunch at the fair, then on to Berlin, the capital of reunified Germany.

May 21, 2002: Berlin. Guided sightseeing in the once-divided metropolis includes the elegant Ku-Damm with the bomb-damaged tower of Kaiser Wilhelm Memorial Church, the Reichstag, monumental Brandenburg Gate, Charlottenburg Palace, and the 210-foot Victory Column in the vast Tiergarten Park. Drive along Unter den Linden Boulevard and past the German State Opera House. Then visit the famous PERGAMON MUSEUM, housing one of Europe's most precious collections of art treasures. Optional excursion to historic Potsdam is available.

May 22, 2002: Berlin-Warsaw, Poland. Cross the Polish border near Frankfurt-on-the-Oder. On the way to Warsaw enjoy vistas of rural life in the fertile central plains, and a break in the historic river port of Poznan.

May 23, 2002: Warsaw. Tour both banks of the Vistula River with your guide and hear about the tormented, often tragic history of this important gateway city between East and West. The medieval Stare Miasto (Old Quarter) with its market square and 14th-century CATHEDRAL OF ST. JOHN is a masterpiece of postwar reconstruction. Also view the "wedding cake" Palace of Culture and Science, neoclassical Lazienki Palace, and the Marszalkowska residential development. In the HISTORICAL MUSEUM see a moving film showing the city before and after wartime destruction. Optional Polish dinner and folklore show at a typical Warsaw restaurant? (BB)

May 24, 2002: Warsaw-Krakow. Two encounters with history on your southbound journey today. First JASNA GORA, the monastery near Czestochowa which withstood the repeated onslaught of overwhelming Swedish forces during the religious wars of the 17th century. Since then its BLACK MADONNA is venerated as the "Queen of Poland" and has become the country's national symbol. In the afternoon visit what is left of the AUSCHWITZ CONCENTRATION CAMP, a chilling reminder of the Holocaust. Evening arrival in Krakow.

May 26, 2002: Krakow-Slovakia-Budapest, Hungary. A scenic day taking you right through the heart of mountainous and densely wooded Slovakia, where the brown bear still roams free. Approach Budapest soon after arriving in the wide open valley of the Danube River. Optional folklore performance.

May 27, 2002: Budapest. A local expert explains the history and sights of the liveliest and most cosmopolitan metropolis of Eastern Europe. Castle Hill at the heart of Buda, the part of the city occupying the west side of the Danube, is a good place to start. From the lacy lookout towers of Fisherman's Bastion enjoy a panoramic view of the sprawling city, home to more than one-fifth of the Hungarian population. The 13th-century MATTHIAS CORONATION CHURCH, the CITADEL on Mount Gellert, and Heroes Square are also on the agenda.

May 28, 2002: Budapest-Vienna, Austria. Morning excursion to the rural area south of the capital. Call at a typical PUSZTA HORSE FARM and shoot your pictures of fiery horses presented by herdsmen in traditional costumes. Then feast on steaming Hungarian goulash. In the afternoon drive by way of the Austrian lowlands to Vienna, once the center of the mighty Hapsburg Empire.

May 29, 2002: Vienna. Start your sightseeing with vistas of the Prater amusement park with its giant Ferris wheel, and the ultra-modern United Nations City on the banks of the Danube River. Then drive along Ring Boulevard, pass the State Opera House and stop at famous Heldenplatz for a picture of the Hofburg Palace, winter residence of the Imperial Royal Family. During your walking tour of the old town, see the synagogue and visit ST. STEPHEN'S CATHEDRAL. Afterwards time to watch the famous midday parade of historical figures at the musical Anker Clock. Optional excursions to Schönbrunn Palace.

May 30, 2002: Vienna-Prague, Czech Republic. Across the Czech border and into Moravia for a lunchtime break in Brno, Napoleon's headquarters during the "battle of the three Emperors" at nearby Austerlitz. An orientation tour features Spielberg Castle and other landmarks of the country's second-largest city. In the afternoon drive through the rich farmlands of Moravia and Bohemia to Prague.

June 1, 2002: Prague. Morning sightseeing reveals why Prague is considered one of Europe's most attractive capitals. See 1,000-year-old HRADCANY CASTLE, the former residence of Bohemian kings; St. Vitus Cathedral; the Old Town; the Jewish ghetto; and the Astronomical Clock, once the envy of all Europe. Afterwards mix with the locals in Wenceslaus Square, wander along the banks of the Vltava River, relax at an outdoor restaurant, or shop for hand-cut crystal or art books.

June 2, 2002: Prague-Frankfurt, Germany. Via Pilsen, the world capital of beer brewing since the Middle Ages, to the German border. In the afternoon visit the charming, medieval, walled town of Rothenburg.

June 3, 2002: Morning train to Rudesheim Am Rhein, a picturesque town on the banks of the Rhine, with numerous restaurants, hotels, and winestubes. Ride the suspended tram above the vineyards up the hillside to the Kaiser Wilhelm Memorial and spectacular views of the vineyards, town, river, and countryside. After lunch board the boat for a trip downriver along the most scenic portion of the Rhine, past numerous medieval castles and the Lorelei rock to the town of St. Goarshausen. Return to Rudesheim for dinner, then take the train back to the hotel in Frankfurt.